Cannabis, commonly known as Marijuana and by numerous other names, is a preparation of the Cannabis plant intended for use as a psychoactive drug and as medicine. (Wikipedia)

People around the world use it for relaxation, mood enlightenment and for a state – euphoria. There have been thousands of debates about its side effects and that why it should be banned.

After a thorough research, I have managed to find a few interesting medical and other advantages of marijuana which probably many of us were not aware of! Here, check them out –

1. According to the findings published in the journal PLoS ONE, researchers have now have now discovered that marijuana-like chemicals trigger receptors on human immune cells that can directly inhibit a type of human immuno-deficiency virus (HIV) found in late-stage AIDS. The most active ingredient of marijuana is capable of cutting down the tumor growth in common lung cancer. Not only that, it significantly reduces the chances of the cancer to spread, according to the researchers at Harvard University. 3. The ingredients of Marijuana are hundred times more powerful than Aspirin, and they have relatively potent pain-reducing and anti-inflammatory actions within the body.

Anandamide, tetrahydrocannabinol (THC) and many of the ingredients of the marijuana plant, such as cannabidiol, cannabidiol and cannabigerol, have effects which are several hundred times more powerful than that of Aspirin. This is the reason why some sufferers of Migraine find a relief in Marijuana. 4. Marijuana can be used to treat and prevent the eye disease Glaucoma.

Glaucoma is a disease which increases the pressure in the eyeballs and hence may even result in a loss of eyesight. Smoking Marijuana reduces pressure in the eyes, according to  National Eye Institute, which says that marijuana, when smoked, lowered intraocular pressure (IOP) in people with normal pressure and those with glaucoma. 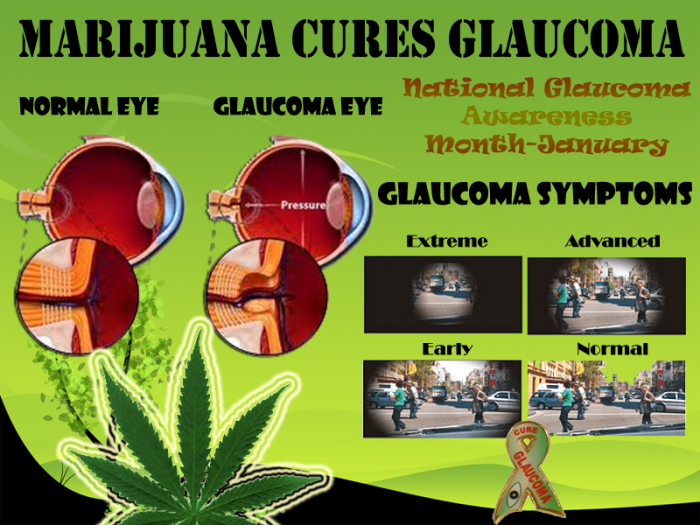 5. Marijuana helps to stop the progression of Alzheimer’s Disease

A study found that Marijuana blocks the enzyme behind progression of Alzheimer’s Disease. Here is Seth Rogen’s hilarious yet heartwarming Senate testimony on Alzheimer’s research. 6. Marijuana is known to decrease the insulin level in diabetes

A study shows that Marijuana may help control blood sugar and help users stay slimmer and lower their risk of developing diabetes. 7. Marijuana can be used to cure PMS syndrome

It is well known that two to ten percent of women have significant premenstrual symptoms that are separate from the normal discomfort associated with menstruation in healthy women. Marijuana also aids Premenstrual Dsphoric Disorder (PMDD). There are Marijuana strains known to cure PMS. Parkinson’s disease is a progressive disorder of the CNS (central nervous system) that results in tremor, slowed movement and muscle rigidity. Marijuana reduces pain and increases sleep for the Parkinson’s patients. 9. Marijuana is believed to reverse the carcinogenic effects of tobacco and also improve lung health!

A study shows that Marijuana does not impair lung function – at least not in the doses inhaled by the majority of users. Epilepsy is a neurological disorder characterized by epileptic seizures which can vary from brief to long periods of vigorous shaking. According to a study, ingredients in marijuana and the cannabinoid receptor protein produced naturally in the body to regulate the central nervous system and other bodily functions play a critical role in controlling spontaneous seizures in epilepsy.

Often used to relieve the side effects of chemotherapy, Marijuana is also used to suppress nausea. Tourette syndrome  is an inherited neuropsychiatric disorder with onset in childhood, characterized by multiple physical (motor) tics and at least one vocal (phonic) tic. Marijuana is known to help calm Tourette’s 13. Marijuana helps to ease the pain caused by Multiple Sclerosis

Multiple sclerosis (MS), also known as disseminated sclerosis or encephalomyelitis disseminata, is an inflammatory disease in which the insulating covers of nerve cells in the brain and spinal cord are damaged.  A research showed that the patients of Sclerosis got the pain eased by Marijuana and it also helped reduce the painful muscle cramping. This is because Marijuana acts as such effective medication, that it can reduce dependence on opiate-based medication, which has more addictive qualities. 15. Marijuana helps lessen the side effects of treatment of Hepatitis C

Hepatitis C is an infectious disease affecting primarily the liver, caused by the hepatitis C virus (HCV). The negative side effects of the treatment of Hepatitis C are harsh. They include fatigue, nausea, muscle aches, loss of appetite, and depression — and lasts for months. A study showed that 86 percent of patients using marijuana successfully completed their Hep C therapy. Rheumatoid arthritis (RA) is a chronic, systemic inflammatory disorder that primarily affects joints. It may result in deformed and painful joints, which can lead to loss of function. At many hospitals, researchers from rheumatology units prescribed their patients sativex, which is a cannabinoid-based pain-relieving medicine. The result after a span of 14 days showed that people on Sativex had an apparent reduction in pain. Not only that, it also improved sleep quality compared to the placebo users. 17. Though the list of fatal effects of its overdose is long, Marijuana is known to trigger creativity in brains

Contrary to beliefs and stereotypes, Marijuana usage has shown to have positive mental effects. According to a study by Wired, using cannabis allowed people to come up with a greater range of related concepts. The article also states, “while cigarettes are like caffeinated smoke – they increase attention and productivity, marijuana is the drug of choice for slackers, hippies and Seth Rogen characters.” Apart from these, medical Marijuana is known to have a lot of advantages for numerous diseases. Having said that, the fatal effects that the overdose of Marijuana has cannot be ignored!

Besides the good side of Marijuana, it is advisable to be of the right age to resort to it.