Guess what? KRK is back with another film review this week. We don’t know who believes in his reviews but he still publishes these videos, anyway!

He is the only one left from his species and we are glad his species is facing a massive extinction!

KRK decides to review Zoya Akhtar’s ‘Dil Dhadkane Do’ and the video clearly shows that KRK doesn’t like Ranveer Singh at all. He despises the super star so much that even if he gets to act with another superb heroine, the heroine is tagged as a ‘nachaniya’ no matter, if she plays the role of a decent dancer on a cruise.

We all know KRK is not a man to be taken seriously and his reviews are hardly ever going to be considered important. However, the way this worldwide known douche-bag has tried to bring Ranveer down, talked about Zoya Akhtar’s directorship and DDD’s story, his comments are both teasing, funny and worth to be read just once.

Here’s what he said about the coolest actor ever, Ranveer Singh while narrating the story. 2. Anushka Sharma, who is playing the role of a dancer becomes a “nachaniya” because she is paired against Ranveer Singh. 3. KRK did you ever think that the role demanded Ranveer to be a flirt? 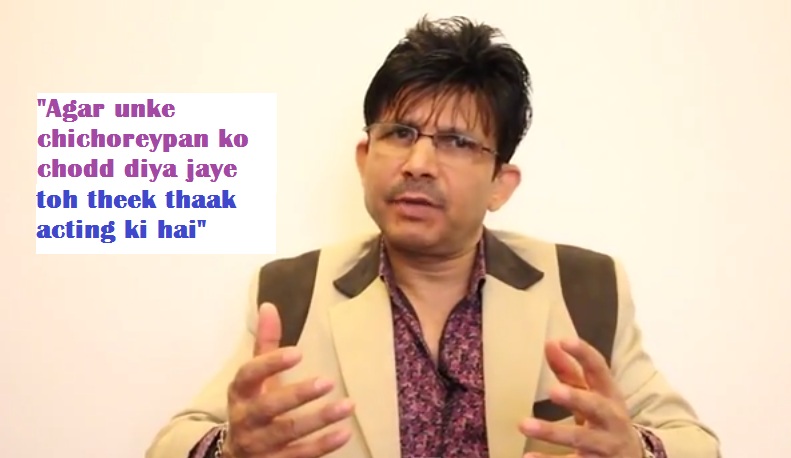 4. Ranveer Singh get’s blamed for another death of a super star for the dialogues said in the movie. He never wrote them himself, you piece of insignificant s***t! :/ 5. Just because he couldn’t narrate the story , he believed that the film was based on no story at all! 6. This is hilarious! The man talks about the mistakes in the film and he is spot on. 7. The final verdict from the only joker whom no one can ever take seriously! So, there was no story in the film, Anil Kapoor was acting (and probably looking) younger than he should which really offended him and one of the main characters acted just OK because he was supposed to be a “chichora” in the movie. Listen up, KRK, this is a Zoya Akhtar and Farhan Akhtar film, no actor acts OK in their films! Go home, you are drunk!

Here’s his DDD review video. We dare you to watch it.